Matthieu Ricard is widely regarded as the Happiest Man in the World. He is a French Microbiologist who became a Buddhist monk 30 years ago. He spends 3 months every year in a remote hermitage in Nepal with hardly any comforts we know of.

A 12 yr long brain study conducted by University of Wisconsin neuroscientist Richard Davidson is the proof behind this claim. Sensors hooked on to Matthieu’s head revealed he has abnormally large capacity for happiness and very low propensity towards negativity. Matthieu’s brain produces a level of gamma waves never reported before by neuroscientists.

We can debate about the study and its findings but we can safely assume that Matthieu is amongst the happier people that this planet knows of. Traits he shows are easily amongst the widely recognised traits of happiest people that every study backs. So lets just compare how an average person fares against the big daddy of happiness, Matthieu Ricard.

Watch Matthieu Ricard’s TED Talk on “The Habits of Happiness”

Here’s a 51 min interview with Matthieu Ricard, the Happiest Man int the World 🙂 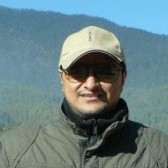 More from this Author

Sandeep is a seeker who practices Meditation & Yoga regularly along with a hectic start up life. His love for Nature & Travel has taken him across 26 countries, 27 states in India, 2 peaks & numerous treks. While his venture Roads Less Travelled captures his outward travels, this blog is an attempt to capture some of his Inner Journey Experiences :)